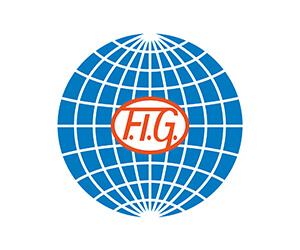 The FIG Council made several important decisions during its meeting in St. Petersburg, Russia on 2 and 3 May. These included the choice of new formats for the Artistic Gymnastics and Rhythmic Gymnastics World Championships, as well as changes to the qualification system for the Paris 2024 Olympic Games.

“Every national federation, even the smallest, must have a chance to host a World Championships,” said FIG President Morinari Watanabe. “One of the most common criticisms was that our World Championships were too long. The format changes that we have adopted will help reduce the length and the costs, help make the competition more thrilling as well as enhance the value of the continental championships.

“It was also crucial for us to implement a qualification system for Paris 2024 that everybody can understand while being fair to the best athletes”, he underlined.

Artistic Gymnastics
The new format will come into force at the 2022 and 2023 Worlds, which will limit the number of participants to 208 in the Men’s competition and 201 in the Women’s. This will allow a reduction in the overall duration of the World Championships to 11 days, compared to 15 at the 2018 event, with two training days and two competition days less.

The qualifying system is composed as follows: 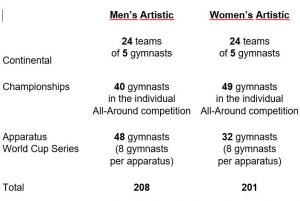 Rhythmic Gymnastics
From the 2021 World Championships, participation will be limited to 105 gymnasts in individual events, with quotas distributed between the five continents. The results of the Continental Championships will determine the allocation of places to each federation, with a maximum limit of 3 gymnasts per nation.

For the group competition, participation will remain open to one group per federation in 2021 and 2022, and will be limited to a maximum of 30 groups for the 2023 World Championships. The number of days of competition will therefore be reduced to five, against seven for the 2018 Worlds.

Another change concerns the Team competition. This will take into account both the results of gymnasts in the Individual competition (the two scores on each of the four apparatus during the qualification competitions) and the Group competition (the scores of the two different exercises).

The final of the individual All-Around competition will be reserved for the 18 best qualifiers (maximum of two per country) instead of the best 24 at the moment, while there is no change regarding the finals per apparatus with 8 gymnasts.

Trampoline Gymnastics
Originally featured in the 2018 World Championships, the new Team All-Around Competition will be added to the Worlds. This mixed, multidisciplinary competition for national teams has two stages. Each nation earns points according to the ranking of its best gymnast or pair in each of the eight events (Individual Trampoline, Synchronised Trampoline, Tumbling, and Men’s and Women’s Double Mini-trampoline). The five best teams qualify for the final, where all performances are taken into account to determine the medal winners.

Artistic Gymnastics
The main change concerns the number of gymnasts per team. It will mark a return to the formula of a maximum of five gymnasts, compared to four per team and two individuals in the Tokyo 2020 Olympic Games.

The 2022 World Championships will form the first qualifying event, with the three teams who finish on the podium qualifying for the Games. Most of the places for the Olympic team and individual competitions will be at stake one year later, at the 2023 Worlds. The final opportunities for Olympic qualification will come in the 2023-2024 Apparatus World Cup Series and the 2024 Continental Championships.

The 2024 Continental Championships will also have a key role to play. They will offer each continent one place for an individual gymnast and one for the groups.

Trampoline Gymnastics
Half of the qualifying slots will be available during the 2023 World Championships. The eight finalists in the individual Men’s and individual Women’s Trampoline competitions will secure a ticket for their country to the Games, albeit with a limit of one per country.

The 2023-2024 World Cup Series will give the best-placed gymnasts another chance to represent their nation. The remaining places will be allocated in a manner that ensures the representation of all the continents based on the results of the 2023 World Championships.

The World Games 2021
The programme of events for The World Games has been revised for the next edition scheduled in 2021 in Birmingham (USA). It includes:

Men’s and Women’s Speed-run and Freestyle

We are pleased to inform you that the Directives and Appendices for the 49th FIG Artistic Gymnastics World Championships in Stuttgart (GER), which will take place from 4 to 13 October 2019, are now available on the FIG website (enclosed as well).

We kindly invite you to pay particular attention to the different deadlines and to respect them. Many thanks in advance.

We remain at your disposal for any query and thank you for your attention.

GfA Manual 2019 - Sports Dpt. Official Communication
To the attention of:

We have the pleasure to inform you that the the English version of the Gymnastics for All Manual, 2019 edition, has been published on the FIG website, here.

The French version will be published shortly.

We have the pleasure to inform you that the English and French version of AER Newsletter #4 have been published on the FIG website in the “Aerobic Gymnastics” section under “Newsletters”.

To the attention of:

We have the pleasure to inform you that following the approval of the Executive Committee the following rules have been updated and published on the FIG website:

Media Rules
World Cup and World Challenge Cup Rules
﻿
You may access the Rules section of the FIG website here.

The 17th World Gymnaestrada has been allocated to Amsterdam, the capital of The Netherlands. After the decision was taken unanimously by the International Gymnastics Federation’s (FIG) Executive Committee during their meeting at the federation’s headquarters in Lausanne (SUI) on Wednesday, FIG President Morinari Watanabe (JPN) and Monique Kempff (NED), President of the Royal Dutch Gymnastics Federation (KNGU), signed a corresponding agreement for The Netherlands to host the 2023 World Gymnaestrada.

With Rotterdam having held the inaugural World Gymnaestrada in 1953, the FIG’s Gymnastics for All flagship event will be returning to the country of its birth 70 years later. Amsterdam itself acted as host city for the 1991 edition, meaning that this will be the third time for The Netherlands and the second time for its capital to host this festive event.

The World Gymnaestrada is the biggest event on the FIG calendar and attracts around 20,000 participants every four years. The 17th edition is scheduled for 6 – 12 August 2023. While the iconic Olympic Stadium will stage the opening and closing ceremonies, the RAI Amsterdam Convention Center will be at the heart of the event, hosting the FIG Gala, and group and national performances. Open stages at striking locations throughout the city will provide a platform for the staging of a diverse range of performances.

The World Gymnaestrada, with its non-competitive nature based on the principles of “friendship, fun, fitness and fundamentals”, fits well with Amsterdam’s overall sports for all policy that embraces a healthy and social lifestyle, and the city is committed to promoting the uniqueness and diversity of Gymnastics.

FIG President Watanabe said: “I am very happy with the decision to allocate the 17th World Gymnaestrada to Amsterdam, one of the most beautiful cities in the world. This is great news not only for the history of Gymnastics, but also for the history of Amsterdam. The organising committee can count on the FIG’s full support. Let’s create a new chapter in history together!”

FIG Gymnastics for All President Margaret Sikkens Ahlquist (SWE) said: “I am very impressed with The Netherlands’ strong presentation and extensive bid book. I thank the Royal Dutch Gymnastics Federation and the City of Amsterdam for all the hard work they have put into this bid and I congratulate them on a successful campaign.”

KNGU President Monique Kempff said: “We are honoured to host the World Gymnaestrada 2023 in Amsterdam. We are looking forward to welcoming the world Gymnastics family to The Netherlands and to inviting them to take the stage and feel at home.”